What is bovine TB?

Bovine TB is a disease caused by a specific type (species) of bacteria called M. bovis.  Bovine TB usually affects animals such as cattle, but it can affect practically all mammals causing a general state of illness, coughing and eventual death. It can be transmitted from animals to humans as well as to other animals. M. bovis is a different type of bacteria to the bacteria M. tuberculosis, that is the type that usually causes disease in humans. 1The name Tuberculosis comes from the nodules, called ‘tubercles’ which form in the lymph nodes of affected animals.

How is bovine TB spread? 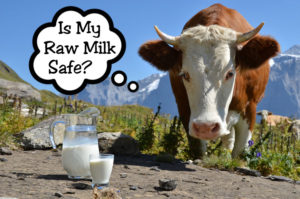 Differing views are held about the safety of raw milk

The disease is spread by contact between infected domestic animals such as cattle, and wild animals and humans. The usual route of infection is by animals and humans inhaling infected droplets which are expelled from the lungs by coughing. Infection can also occur from direct contact with a wound. For example, a wound that might happen during slaughter or hunting. It is also believed by most people that calves and humans can also become infected by ingesting raw (unpasteurized) milk and other dairy products from infected cows.

Because the course of the disease is slow, an animal can spread the disease to many other herd mates before it begins to show clinical signs of disease. So movement of infected but undiagnosed domestic animals and contact with infected wild animals are the major ways of spreading the disease.

What are the symptoms of bovine TB in humans?

How is bovine TB diagnosed?

The standard method for the detection of bovine TB in animals is the TB skin test. This is the same test that is used to diagnose TB caused by either M. bovis or M. tuberculosis in humans. A definitive diagnosis is made through the use of the culture test a test which can take at least six weeks.

How is bovine TB treated?

How much human disease is caused by M. bovis?

The figures for zoonotic disease worldwide are the latest available from WHO.

Estimated incidence and mortality due to M. bovis 2019

Which animals can get bovine TB?

Buffalo in South Africa have been found to have Bovine TB

Although cattle are considered to be the main hosts of M. bovis, the disease has been reported in many other domesticated and non-domesticated animals. These include:

Where in the world is it found?

TB is found throughout the world. The disease is more prevalent in most of Africa, parts of Asia and the Americas. Many developed countries have reduced or eliminated bovine TB from their cattle population; however, significant pockets of infection remain in wildlife in Canada, the United Kingdom, the United States and New Zealand. Until the 1920s when control measures began in developed countries, TB was one of the major diseases of domestic animals throughout the world. Today it remains a major disease of cattle and wildlife.

What is being done to control bovine TB?

For many years the control of bovine TB has focused on the control of bovine TB in domestic cattle herds. This has been through whole herd skin testing, slaughter surveillance and monitoring the movement of animals between herds.6 Vaccinating cattle for the control of bovine TB is not currently used within any international control program and it is illegal within the E.U.7 This is because vaccines based on the TB bcg vaccine, all interfere with the action of the tuberculin skin test which is used for the diagnosis of TB in cattle. If the bcg vaccine is used then it is impossible to differentiate between cattle that have TB and cattle that have been vaccinated.

The pasteurization of milk and other dairy products has been important in preventing the spread of the disease to humans. Pasteurization means heating the milk to a sufficient temperature that any bacteria in the milk will be killed.

In recent years it has become clear that the disease in certain countries has become established in “wildlife reservoirs” of infection in different host animals. These are as varied as:

In these instances it has been assumed that livestock, usually cattle, served as the initial source of infection for different wildlife species. It has however been unclear when this may have happened. The wildlife were then able to maintain the disease in their free ranging populations until contact between livestock and infected wildlife allowed the disease to be transmitted back to the livestock. So this allows the disease to continue whatever action is taken with infected cattle herds.

The control of bovine TB in wildlife is complex as there are limitations to what can practically be achieved, and a variety of stakeholder interests that need to be taken into consideration. A range of actions to address the disease risk have been adopted in various countries and with different wildlife populations. These include:8

This page was last updated in April 2022.
Author Annabel Kanabush2>

If you have found this page useful please tell other people about TBFacts and if you have a website please link to us at http://752.cc4.myftpupload.com/bovine-tb/.