Drug resistant TB has frequently been encountered in India. Its presence has been known virtually from the time anti TB drugs were first introduced for the treatment of TB. If a person has drug resistant TB it means that their illness will not respond to at least one of the main TB drugs.

So a high quality DOTS program, which included supervising people taking their drugs should prevent the emergence of resistance. But it had then been found that drug resistant bacilli were not less infectious. In fact people who had contact with previously untreated patients had a similar risk of infection regardless of whether the bacilli were drug susceptible or drug resistant.1 Drug resistant TB is considered to be one of the major impediments to achieving the goal of ending TB in India.

In 2017 new Guidelines on the Programmatic Management of Drug-Resistant Tuberculosis in India were published.

In 2018 the report of the first National Drug Resistance Survey (NDRS) was released. It was the largest ever NDRS conducted by any country in the world. It was also the first to include drug susceptibility testing (DST) for 13 anti-tb drugs using MGIT 960. 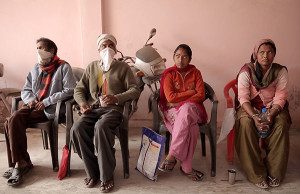 TB patients wait for their treatment at a DOTS centre in India. Several have drug resistant TB. © Maureen Scarpelli

The estimated % of previously treated cases with MDR/RR-TB was 12%.

% of those notified tested for rifampicin resistance was 32% (new cases) 82% (previously treated cases).

56% of the estimated MDR patients were undiagnosed.

64% of the estimated MDR patients were untreated.

Guidelines on Programmatic Management of Drug Resistant TB in India

India has been finding and treating MDR-TB patients since 2007. Country wide treatment of drug resistant TB has been provided since 2013.

PMDT is an abbreviation of the Programmatic Management of Drug Resistant TB. PMDT refers to programme based drug resistant TB diagnosis, management and treatment.

New guidelines published in 2017 promote full integration of basic TB control and PMDT activities under the NTEP. This is so that patients with TB are evaluated for drug-resistance and placed on the appropriate treatment regimen and properly managed from the outset of treatment, or as early as possible.

The new guidelines in 2017 replaced previous documents including the RNTCP Technical & Operational Guidelines 2016 and the Guidelines for use of Bedaquiline under Conditional Access through RNTCP.

The PMDT is a very comprehensive document which includes describing the decentralization of the diagnosis and treatment of MDR-TB to district level.

In November 2019 the World Health Organisation and the Government of India announced that they were conducting a Joint Monitoring Mission (JMM) which would review India's progress towards the implementation of the National Strategic Plan 2017-2025.2

The initial 2019 JMM report explained how, amongst other things, the new guidelines recommend that the number of standard regimens for drug resistant TB patients be reduced from the current 11 to 3. Treatment is to be largely ambulatory and support structures for patients have been put in place.

But alongside the noting of the achievements, it was also said that adoption of the PMDT might result in huge challenges related to their disssemination, to training and to implementation.3

The primary objective of the study was to determine the prevalence of MDR-TB in both newly diagnosed and previously treated sputum smear positive TB patients.

One of the key findings of the study was that the proportion of Multi-Drug Resistant TB (MDR-TB) among new and retreatment TB cases was 2.84% and 11.6% respectively. Monoresistance to rifampicin was not observed among new TB patients. Rifampicin resistance was always accompanied by isoniazid resistance.4

Another key finding was that more than a quarter of all TB patients in India have drug resistance to one of the anti TB drugs.

In respect of all forms of drug resistance, other than MDR TB, the figures were 19.71% amongst new patients and 25.20% among previously treated patients.

In response to the survey it was said that:

"there is a need to speed up and broaden access to effective treatment through expansion of Drug Susceptibility Testing (DST) and patient centred models of care. This will not only save lives but can also reduce the risk of transmission, including to family members, Dr Stobdan Kalon, MSF Medical Coordinator in India"

There were wide variations in the level of drug resistance in each state. The figures for each state were as shown below:

If you have found this page useful please tell other people about TBFacts.org and if you have a website please link to us at https://tbfacts.org/drug-resistant-tb-india/.