What is the Genexpert test?

What is usually referred to as the Genexpert test, has now been developed by the manufacturer Cepheid into a series of molecular tests for TB & other diseases based on the cartridge/assay used. The Genexpert can test for a number of infectious diseases including TB & COVID.

What is the CB-NAAT?

In India the Genexpert is known as the CB-NAAT. The full name of the CB-NAAT test is the Cartridge Based Nucleic Acid Amplification Test.

How does the Genexpert work in testing for TB?

The Genexpert diagnoses TB by detecting the presence of TB bacteria. The test is a molecular TB test which detects the DNA in TB bacteria. It uses a sputum sample and can give a result in less than 2 hours.

The Genexpert can also detect the genetic mutations associated with resistance to the drug Rifampicin.1

In July 2020 it was announced that a new test had been developed which could detect resistance to both first line and second line drugs. This means that clinicians can find out in 90 minutes which drugs a patient is resistant to, and prescribe the correct treatment for both MDR-TB and XDR-TB.

By providing test results in just a few hours, the Xpert MTB/XDR test will save lives 2

When did the Genexpert test first become available?

In December 2010 WHO endorsed the Genexpert technology and released a recommendation and guidance for countries to incorporate the new test into their programs.

What is the cost of the Genexpert TB test?

FIND originally negotiated discounts for the Genexpert test in 120 high burden and in all low and middle income countries and the initial cost was approximately US$17 per cartridge.

In June 2012 the organisation UNITAID approved funding of $30 million with the aim of scaling up access to the Genexpert test. It was hoped that the roll out of the test would bring the price down from US$17 to US$10. However the roll out proceeded slower than expected and it is believed that many customers delayed ordering as they expected the price to be reduced following the UNITAID announcement. 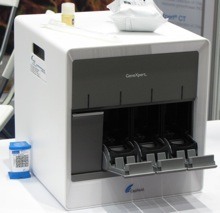 In addition to the cost of each test there is the cost of the Genexpert device. The device comes in different sizes providing for a different number of samples to be tested simultaneously. The commonly used GX4 which has 4 modules, had a cost initially of approximately US$17,000. There are in addition costs for delivery and installation, and there is an annual servicing cost.3

There is limited information about more recent costs.

The use of the Genexpert test

WHO recommended that the test should be used as the initial diagnosis test in individuals suspected of having MDR TB, or HIV associated TB. They also suggested that it could be used as a follow on test to microscopy in settings where MDR TB and/or HIV is of lesser concern, especially in smear negative specimens, because of the lack of accuracy of smear microscopy. They did however say that they recognised the major resource implications of using it in this second way.4

WHO did also emphasize that the test does not eliminate the need for conventional microscopy culture and drug sensitivity testing, as these are still required to monitor treatment progress and to detect other types of drug resistance. The Genexpert MTB/RIF cannot be used for treatment monitoring, as it detects both live and dead bacteria.

Further guidance was subsequently provided by WHO on the rapid implementation of the new test.5 6

Advantages and disadvantages of the test

WHO have been particularly keen on the use of the test and in 2010 said that:

“This new test represents a major milestone for global TB diagnosis and care. It also represents new hope for the millions of people who are at the highest risk of TB and drug resistant disease.”
Dr Mario Ravihlione, Director of WHO Stop TB Department 7

The test does however have disadvantages as well as advantages.

The main advantages of the test are, for diagnosis, reliability when compared to sputum microscopy and the speed of getting the result when compared with the culture test. For diagnosis of TB, although sputum microscopy is both quick and cheap, it is often unreliable. It is particularly unreliable when people are HIV positive. Although culture gives a definitive diagnosis, to get the result usually takes weeks rather than the hours of the Genexpert test.

The main advantage in respect of identifying rifampicin resistance, is again the matter of speed. Normally to get any drug resistance result takes weeks rather than hours.

A considerable number of articles have been written reviewing the use of the Genexpert test, and the WHO maintains a list of some of the major articles.9

In October 2013 a multi centre trial comparing the use of the Genexpert  to microscopy, concluded that using the Genexpert meant that more patients had a same day diagnosis and same day treatment initiation, but the benefits did not translate into lower TB morbidity.10

The global roll-out of the Genexpert

The global rollout of the test was initially slower than organisations such as WHO and FIND would probably have wished. By the end of 2011 a total of 460 Genexpert machines (comprising 2,401 modules) and 591,450 Genexpert  test cartridges had been bought for 47 countries, using the special pricing arrangements arranged by FIND with Cepheid.

Over half of the Genexpert  cartridges (330,540 cartridges) had been bought for use in South Africa. Other countries who had bought cartridges were Pakistan (21,440), Kenya (20,140), the Philippines (17,440) and Swaziland (16,600).12 There is more about TB in South Africa. By the end of September 2012 a total of 898 Genexpert machines (comprising 4,660 modules) and 1,482,550 cartridges had been purchased in 73 of the 145 countries eligible for concessional pricing. There was an increase in the purchase of cartridges in the third quarter of 2012, which it is likely was associated with the drop in cartridge price around that time.13

In September 2013 UNITAID and WHO started the largest rollout of GeneXpert with UNITAID investing US$25.9 million to purchase over 220 GeneXpert machines and 1.4 million test cartridges for 21 countries in Africa, Eastern Europe and Asia.14 However, it is still a challenge as the machines need a continuous power supply and air conditioning is also needed where there are high temperatures.15

By 2014 the use of the GeneXpert had expanded significantly. In total 4.8 million cartridges were bought in 2014 by 116 low and middle income countries at concessional prices. By 2015 69% of the countries recommended using Genexpert as the initial diagnostic test for people at risk of developing drug-resistant TB and 60% recommended it as the initial diagnostic test for people living with HIV. Between 2011 and 2016 more than 16 million tests had been carried out in 122 countries.16

The use of the GeneXpert test in India

The GeneXpert test first started to be used to test for TB in India when it was used in reference laboratories as part of a demonstration project. Subsequently a two year project took place to evaluate the use of the test at 18 sites across India.17 In March 2012 it was announced which hospitals were going to benefit by being the first sites where the GeneXpert will be installed.18

It has been said that it might not be as effective in India as elsewhere as the heat and humidity could affect the equipment. The result could be that:

“The technique cannot be used for routine testing. We have pilot projects at 18 sites going on to test its feasibility in the Indian situation where the climate and temperature conditions are different from the western countries. … Solid culture/sputum testing remains the golden standard for Indian conditions.”
Ashok Kumar, Deputy Director General, Central TB control Division, Ministry of Health and Family Welfare 19

Subsequently though the CB-NAAT test, as it is known in India, has started to be widely used. There is more about the diagnosis of TB in India.

The CB-NAAT is also now starting to be used in India to diagnose TB in Children in India.20 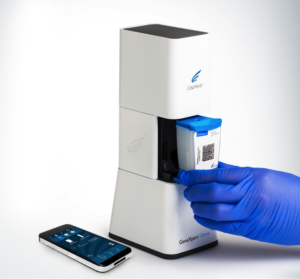 In 2015 the Cepheid Genexpert Omni assay was launched. It was found to be non-inferior to the standard Xpert MTB assay for the diagnosis of TB and the detection of rifampicin resistance and it can be used as an alternative to the latter in all settings. Cepheid plans to gradually phase out and replace the current Xpert MTB assay with the Ultra assay.21

This page was last updated in May 2022.
Author Annabel Kanabus

If you have found this page useful please tell other people about TBFacts.org and if you have a website please link to us at https://tbfacts.org/genexpert/.