Which are the TB high burden countries

Indonesia is a country with a very high burden of TB

A country’s burden of TB

The TB statistics page gives the TB incidence for all high burden countries.

The number of incident TB cases relative to the population size of a country varies greatly among countries. The lowest rates, that is the countries least affected by TB are found mostly in high income countries, including most countries in Western Europe. Canada, the United States of America, Australia & New Zealand also have among the lowest rates. In these countries the incident rate is less than 10 cases per 100,000 population per year.

In 1998 the initial list of 22 high burden countries was defined based on the burden of TB in absolute terms. At this time TB was barely on the global health agenda. The aim in creating the list was to highlight the scale of the global TB epidemic, by focusing on a small number of countries responsible for 80% of the total number of TB cases worldwide. The 22 high burden countries were defined as those countries with the highest absolute burden of TB in respect of the estimated number of incident cases. Subsequently Peru was removed from the list and replaced by Mozambique.

Then in 2004 the WHO issued its first guidance on the implementation of 12 collaborative TB/HIV activities. The aim was to jointly address the co-epidemics of TB and HIV. Subsequently in 2005 a list of 41 TB/HIV high burden countries was agreed. The countries in the list made up 97% of the estimated global burden of TB among people living with HIV. This list was then used to promote the scaling up of TB and HIV activities and to help advocate for Global Fund support for these activities. The list was updated each year until 2009.

In 2008 it was decided that a list of high MDR-TB burden countries was important. After some debate the criteria was agreed. The list would consist of countries that collectively accounted for 85% of the estimated global total. Every country in the list was also required to either have more than 4,000 estimated TB cases a year and/or greater than or equal to 10% of new TB cases needed to be of MDR-TB. The list was used in advocating for Global Fund support for MDR-TB activities. This was especially the case for middle income countries with a high MDR-TB burden in central Asia and Eastern Europe. These were countries that would not otherwise be eligible for support. There were 27 countries in the list.

By 2015 it has been realised that there were advantages but also disadvantages to the lists. One particular disadvantage is that the main high burden country list was based on absolute burden, so countries with very high rates per head of population were not included. So it was decided in 2015 that the lists would be revised. After a period of consultation it was decided that there would still be three lists for the next five years.

It was also decided that each list would contain 30 countries using a “20 + 10” approach. This meant that the countries would be the top 20 in terms of absolute numbers of incident cases, plus the ten countries with the most severe burden in relative terms that did not already appear in the top 20. There would also be a threshold of a minimum number of 10,000 cases per year for TB and 1,000 per year for TB/HIV and MDR-TB. This would avoid any of the lists including countries with a very small number of cases.

With several countries appearing in more than one list, in total the three lists include 48 countries.

The three lists are as follows and have been used from 2016. 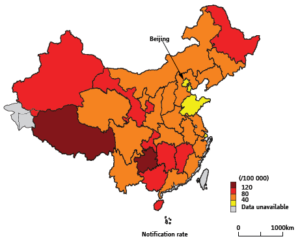 The TB statistics page has the estimated TB incidence for each of these countries. There is also more about TB in India, TB in China TB in Nigeria & TB in South Africa.

This page was last updated in December 2019.
Author Annabel Kanabus

If you have found this page useful please tell other people about TBFacts.org and if you have a website please link to us at tbfacts.org/high-burden-tb/.