The Elimination of TB in India

In March 2017 the Government of India (GoI) announced that the new aim with regard to TB in India was the elimination of TB by 2025.

"Ensuring affordable and quality healthcare to the population is a priority for the government and we are committed to achieving zero TB deaths and therefore we need to re-strategize, think afresh and have to be aggressive in our approach to end TB by 2025"

Elimination as defined by the World Health Organisation (WHO), means that there should be less than 1 person with TB for a population of a million people.

In view of the current TB burden in India, there is a great deal that needs to be done if elimination is to be achieved by 2025.

Burden of TB in India

Worldwide India is the country with the highest burden of both TB and MDR TB. 3

TB treatment & care in India is provided in the public sector by the government’s National Treatment Elimination Program (previously the RNTCP) as well as through private sector health providers. The private sector is very large, and it is believed that more than half of all TB patients in India are cared for in the private sector.

There are many reasons why people in India seek care from the private sector. These include:

It has been said that:

“Many people are unaware that all the medicines needed to treat TB patients are available free of cost at Indian government hospitals. Most people tend to spend huge amounts in private hospitals.” 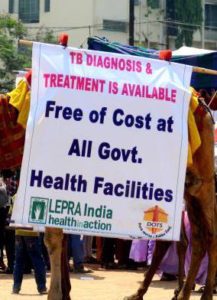 Also, although there is no charge for TB drugs, it has been said that many patients have to sell assets or borrow money to pay for other costs.4

The National Strategic Plan 2017 - 2025 (NSP) set out the government of India's (GoI) plan of how the elimination of TB could be achieved.

In this strategic plan the emphasis was going to be on reaching patients seeking care from private providers. So this NSP built on the work already done with the new NTEP operating guidelines.

The NSP 2017 -2025 outlined key governance interventions and structures that needed to be in place if TB was to be eliminated by 2025.

In 2018 the government launched the Nikshay Poshan Yojana, a direct benefit transfer scheme to provide nutritional support for TB patients. This was one of a number  of Direct Benefit Transfer schemes.

2018 also saw the first ever UN General Assembly (UNGA) high level meeting on Tuberculosis. The meeting resulted in the adoption of a Political Declaration on Tuberculosis which reaffirmed the committment to end the tuberculosis epidemic by 2030.

It included ambitious targets for the scale-up of tuberculosis care and prevention services, as well as commitments on research for new tools, principles of equity and human rights, and targets for both implementation and research.

As a signatory to the declaration, India made a committment to reach the UNHLM targets.

By September 2019 it was clear that in many areas more effective action was needed. Dr Harsh Vardhan, the Union Minister for Health and Family Welfare, launched the new TB Harega Desh Jeetega Campaign.

It was said that multi-stakeholder and community participation would form the core of the countrywide campaign.5

At the same time an assessment took place of the progress that had been made with the NSP 2017 - 2025. This was helped by the Report of the Joint Monitoring Mission, carried out by the NTEP and the WHO. Key governance interventions and structures had been identified that needed to be in place to end TB by 2025. But the planned expansion and restructuring of the NTEP had not happened.

Because of this and the rapidly changing environment within which the NTEP was operating it was also decided to produce an updated NSP, the NSP 2020-25.

The NSP 2020-25 is a framework to guide the activities of all stakeholders. It is a five year strategy document that aims to direct the attention of all stakeholders to the most important interventions that the GoI believes will bring about significant changes in the incidence, prevalence and mortality of TB. But despite the development of the National Strategic Plan 2020-2025, it is the National Strategic Plan for 2017-25 that is still referred to in documents such as the annual TB report.

These strategies and interventions are in additon to the processes and activities already ongoing in the country.

To achieve the targets of the elimination of a number of communicable diseases, and of TB in particular, by 2025, certain new disease control initiatives were to be taken.

One of the most significant was the Sub-National Certification of Disease Free Status, a new important initiative of the NTEP. The intention was that this would provide awards for those States/Districts which achieved TB free status.

Impact of COVID-19 on TB Services

The countrywide lockdown in 2020 had had an adverse impact on routine health care services including those for the management of TB. Patients were unable to access routine health services.  Also individuals with symptoms of TB were unable to reach doctors/hospitals/diagnostic centres in order to get tested. A greater impact was felt by the private sector as many smaller clinics and health facilities remained closed for much of 2020.

By mid February 2021 India had on average 11,000 COVID cases a day. The seven day rolling average of daily deaths was below 100.6 But within a month India was in the grip of a devastating second wave of the virus, and some cities were facing fresh lockdowns.

By mid-April 2021 the country was averaging more than 100,000 cases a day.  The hospitals were full, there was a lack of oxygen, and increasing deaths. In May the National Institute of Tuberculosis and Respiratory Diseases (NITRD) was converted into a designated COVID Care Centre.7

All of this had a severely detrimental effect on the provision of TB services.  Indeed an editorial in the IJMR suggested the focus and diversion of resources to tackle the Covid-19 pandemic was leading to increasingly poor TB care.8

Two of the indicators by which progress can now be monitored are the target number of TB patients that should be notified in both the public and private sectors, and how these compare with the actual figures for both 2020 and 2021.

It would seem that actual notifications were much reduced in 2020, but that there was a strong rebound in 2021.

However the first TB prevalence survey has suggested a measured prevalence rate of 312 per 100,000 population during 2020.

If you have found this page useful, please tell other people about TBFacts and if you have a website please link to us at https://tbfacts.org/tb-india/.