Tuberculosis is an infectious disease which wordwide results in the death of a large number of people each year. Sometimes Tuberculosis is referred to by the abreviation TB. To put it another way, the full form of TB is Tuberculosis.

Tuberculosis is caused by bacteria. The bacteria usually affect the lungs but can affect other parts of the body. Bacteria are different from viruses. It is a new virus, the coronavirus, that causes the disease COVID-19.

What is latent TB?

If you are infected with the bacteria you won’t necessarily become sick, because you can have either latent TB or TB disease. People with latent TB do not feel sick and do not have any symptoms. They cannot pass TB on to other people.

What is TB disease? 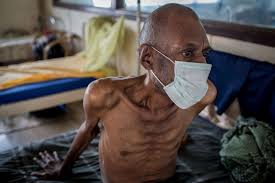 TB disease is what happens when a person has latent TB and then becomes sick. Sometimes this is known as having active TB. Overall about 5 to 10% of people with latent TB, who do not receive treatment for it, will become sick at some time in their lives.

Some people become sick soon after they have become infected, before their immune system (the part of the body that fights diseases) can fight the bacteria. Other people don’t get sick at first but they get sick years later when their immune system becomes weak for another reason. This can be because they have an infection, such as HIV, or some other health problem.

Some people are known to have a higher risk of becoming ill They include:

What are the symptoms of Tuberculosis?

The symptoms depend on which area of the body has been infected. If someone has pulmonary disease, then they may have a bad cough that lasts longer than two weeks. They may also have pain in their chest and they may cough up blood or phlegm from deep inside their lungs. Other symptoms of TB include weakness or fatigue, weight loss, lack of appetite, chills, fever and night sweats.

It is very difficult to diagnose TB by a person’s symptoms on their own. This is because some other diseases have the same symptoms. A diagnosis is usually only certain when there is definite evidence of bacteria. Some of the TB tests used for diagnosis look directly for the bacteria. Others such as the chest X-ray look for the effect of the bacteria on the person suspected of having Tuberculosis. Tests for diagnosis include the skin test, sputum microscopy, the culture test as well as the newer molecular tests such as genexpert & truenat. Major problems with the older tests are the lack of accuracy as well as the time they take. With newer tests a major issue is often the cost.

Tuberculosis can usually be cured and more than twenty drugs have been developed for treating Tuberculosis. But most of the drugs were developed many years ago. The treatment usually consists of a combination of TB drugs that must be taken for at least six months. But the treatment will only be successful if the drugs are taken exactly as required for the entire length of time. The drugs are used in different combinations in different circumstances. For example, the five “first line” drugs are given to people who have never had treatment before. If people have had treatment before they may need to take second line drugs.

If someone has drug resistance it means that the bacteria in their body won’t be affected by certain drugs that they are resistant to. The drugs just won’t work. There are two main reasons why people develop resistance. It can be because the person doesn’t take their drugs properly. It can also be that the bacteria that they are infected with, have come from someone who has already got drug resistant TB.

Being drug sensitive is the opposite of being drug resistant. If someone has drug resistance then they must change drugs. But usually they mustn’t have just one new drug. They need to have several new drugs and for it to be believed that they will all be effective. Drug susceptibility testing which is now available in most countries, and is very important, provides information about which drugs a person is resistant to.

A major part of the prevention of TB is to stop the spread of  bacteria from one adult to another. This is done by firstly finding the people who have TB. Then providing them with effective treatment which means that they are no longer infectious, and they will also usually then recover from being sick. There is a vaccine, the BCG vaccine, but it is used for children as it doesn’t seem to prevent the disease in adults.

TB infection control is also important to prevent people from getting infected in health care facilities. Sometimes it is believed that education only needs to involve people who already have the disease. But there is also a need to educate the general public. This is to ensure that people know how TB is spread, and also to reduce the stigma surrounding the disease. It can also help to ensure that people come forward for testing and treatment as soon as possible.

The statistics for TB show how there are very different levels of the disease in different parts of the world. The countries known as the high burden countries are those with the highest level of disease.

This page was last updated in January 2023. Author Annabel Kanabus

If you have found this page useful please tell other people about TBFacts.org and if you have a website please link to us at https://tbfacts.org/tuberculosis/.