The RNTCP in India

The large scale implementation of the Indian government’s Revised National TB Control Program (RNTCP) (sometimes known as RNTCP 1) was started in 1997. The RNTCP was then expanded across India until the entire nation was covered by the RNTCP in March 2006. At this time the RNTCP also became known as RNTCP II. RNTCP II was designed to consolidate the gains achieved in RNTCP I, and to initiate services to address TB/HIV, MDR-TB and to extend RNTCP to the private sector.

In 2020 the RNTCP was renamed the National Treatment Elimination Program (NTEP) to emphasize the aim of the Government of India to eliminate TB in India by 2025. 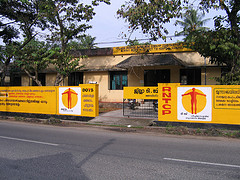 With the RNTCP both diagnosis and treatment of TB are free. There is also, at least in theory, no waiting period for patients seeking treatment and TB drugs.

The initial objectives of the RNTCP in India were:

New sputum positive patients are those people who have never received TB treatment before, or who have taken TB drugs for less than a month. They have also had a positive result to a sputum test, which diagnoses them as having TB.1

There is more information about the current provision of TB treatment in India and the Testing & diagnosis of TB in India.

There have been a number of five year National Strategic Plans (NSP)s since the start of the RNTCP. The NSP 2012 - 2017 had the aim of achieving universal access to quality diagnosis and treatment. Before this there was little treatment available through the RNTCP for the treatment of drug resistant TB.

A number of significant improvements were made during the five years of the plan. These included: 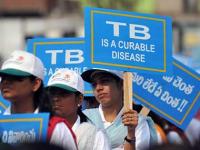 Calls for improved treatment and care for TB in India

Complete geographical coverage for diagnostic and treatment services for multi-drug resistant TB was achieved in 2013. A total of 93,000 people with MDR TB were diagnosed and had been given treatment for drug resistant TB by 2015. Also, the National AIDS Control Organisation (NACO) had collaborated with the RNTCP and had made HIV-TB collaboration effective. Most TB patients registered by the RNTCP were receiving HIV screening and 90% of HIV positive TB patients were receiving treatment.

Notification by the private sector

A government order in May 2012 made it compulsory for health care providers to notify every TB case diagnosed. This was done with the aim of improving the collection of patient care information. It meant that in future all private doctors, caregivers and clinics treating a TB patient had to report every case of TB to the government.

Comments made in response to this move included concerns about enforcement of notification by private practioners;

There was also concern about whether when people are referred to the RNTCP from the private sector there would be a good enough service, and whether in practice TB treatment would be available.

In June 2012 the GoI prohibited the import and sale of serodiagnostic tests for TB. It is now believed that this has saved countless people from having inaccurate results.

The Central TB Division developed a case based and web based system called “Nikshay”. This helped with the reporting of all TB cases. It was scaled up nationally.

Standards for TB Care in India

Among other points this acknowledged that patients would need to be treated by private providers, rather than simply demanding that unwilling patients should be referred to the public sector.

In 2016 the NTEP published revised technical and operational guidance.

The new guidelines, the RNTCP Technical and Operational Guidelines for Tuberculosis Control in India 2016, did not replace the previous guidance (the Standards of TB Care in India). Rather they provided updated recommendations. They also made it absolutely clear that the guidance applied to the private sector, as well as the public sector.

The overall budget required in 2012 - 2017 to achieve the Universal Access vision, to save 750,000 lives from TB, and to control MDR TB, was estimated to be Rs. 5825 crore ($1.17 billion) over the period 2012 - 2017. However, the Planning Commission of India only approved Rs. 4500 crore ($900 million). These budget cuts were widely criticised and in January 2015 a warning letter was submitted to the government signed by TB officers of all states and Union territories. One doctor said:

“There is always a shortage of TB drugs, lack of labs, slow diagnostic tools, inadequate management of treatment and lack of trained personnel. Moreover, since we have failed to give the existing staff their salary dues they are demoralised” 2 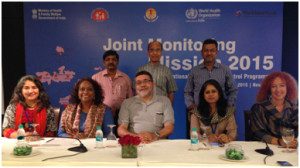 Members of the Joint Monitoring Mission of the RNTCP 2015

Meanwhile the Joint TB Monitoring mission (JMM) of the RNTCP had brought together a number of national and international experts and organisations in 2014. They were to generally review the progress, challenges, plans and efforts of the RNTCP to control TB. The implementation of the NSP 2012 - 2017 was one of the areas looked at.

The JMM acknowledged India’s remarkable achievements in TB control over the previous ten years. This included testing more than 80 million people, detecting and treating 15 million TB patients, and saving millions of lives as a result of the efforts of the RNTCP. However, they also said that overall:

“the implementation of the NSP for 2012 - 2017 is generally not on track: projected increases in case detection by the RNTCP have not occurred, vital procurements are delayed and many planned activities have not been implemented. Also, of the recommendations made by the JMM 2012, about two thirds have not been fully implemented.”

Recommendations made by the JMM report

The report gave extensive recommendations for each part of the report, and these included:

Towards the end of the period of the plan, and despite the improvements that had already been made:

There had continued to be concern about the standard of care provided in the private sector. Delays in diagnosis, the use of multiple non standard regimens for inappropriate lengths of time, the lack of a way to ensure the full course of treatment was being taken, and the recording of treatment outcomes were just some of the issues.

So in 2016 the RNTCP published revised technical and operational guidance. The new guidelines, the RNTCP Technical and Operational Guidelines for Tuberculosis Control in India 2016, did not replace the previous guidance (the Standards of TB Care in India), but they provide updated recommendations. They also made it absolutely clear that the guidance applied to the private sector as well as the public sector.

The strategic vision of the RNTCP is to lay down guidelines and norms for TB care in the country. So the principle of the RNTCP is that they should extend public services to privately managed patients.

The decision was also made to introduce a daily TB treatment regimen. The new anti TB drug bedaquiline for the treatment of drug resistant TB was also to be made available initially in five states.

For diagnosis the GoI set up more than 600 CB-NAAT laboratories, and enhanced their capacity with highly sensitive diagnostic services. CB-NAAT is the name given in India to Cartridge Based Nucleic Acid Amplification tests such as Genexpert and TrueNat.

In 2017 a new guide was published on PMDT. PMDT is an abbreviation of the Programmatic Management of Drug Resistant TB. The guide promotes full integration of basic TB control & PMDT activities under the NTEP.

The guide is a very comprehensive document and more details are available on drug resistant TB India.

If you have found this page useful please tell other people about TBFacts.org and if you have a website then please link to us at https://tbfacts.org/rntcp/.