The TB statistics for South Africa include the TB incidence. This is the number of new cases, usually of active Tuberculosis that have occurred in the country during a certain time period which is usually a year.

There is more about TB in South Africa.

The first national TB prevalence survey started in 2017 with the results becoming available in 2020. The survey showed that South Africa has a far higher number of people with TB than previously thought. It also showed that many people are living with TB who have not been diagnosed or treated.2  It also identified existing gaps and provided recommendations for improving TB management.

It is estimated that about 80% of the population of South Africa is infected with TB bacteria, the vast majority of whom have latent TB rather than active TB disease. The highest prevalence of latent TB, estimated at 88% has been found among people in the age group 30-39 years old living in townships and informal settlements.3 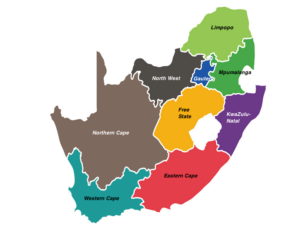 There appears to be little publically available information about how the incidence rates in the provinces and districts may have changed since 2015. The data for 2015 is the data used for the starting point of the National Strategic Plan 2017 - 2022 (NSP). Later data should be available when the mid term report is published of the progress made on the NSP.

The Eastern Cape, KwaZulu-Natal and the Western Cape are the provinces which had the highest incidence rates in South Africa with reported rates of 692, 685 and 681 per 100,000 respectively for 2015.

The districts with the highest incidence rate in each province were as follows:

This page was last updated in September 2021.
Author Annabel Kanabus

If you have found this page useful please tell other people about TBFacts.org and if you have a website please link to us at tbfacts.org/tb-statistics-south-africa/