How many people die from TB? 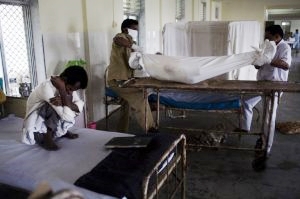 Just one death from TB ©Rochind

Many people die as a result of TB.

In 2020 an estimated 1.3 million people who were HIV negative died of TB.

In addition there were an estimated 214,000 deaths resulting from Tuberculosis among people who were HIV positive.

A single death from TB

is a tragedy for those people left behind. But it is also a terrible way to die.

Most of these deaths could have been prevented with earlier diagnosis and appropriate treatment.

How many adults died from TB in 2019 in different parts of the world?

The lowest rates, that is the countries least affected by TB are found mostly in high income countries. This includes most countries in Western Europe. In these countries the incident rate is less than 10 cases per 100,000 population per year.

Countries with a very low incident rate tend to have different aims with regard to TB, compared to the high incidence countries. For example with TB in the United States of America, the aim is the eradication of TB.

The deaths from TB in other "low burden" countries will be included here by request.

Of all the countries that report their TB statistics to the World Health Organisation (WHO), there are 22 countries that are referred to as the TB “high burden” countries.  These countries have been prioritized at a global level since 2000. In 2015 it was decided by WHO that the lists would be revised but that there would still be three lists. Each list would contain 30 countries. There is more about this on the TB high burden countries page.

The country with the highest estimated number of deaths is India with an estimated 436,000 deaths in HIV negative adults and 9,500 in HIV positive adults. This does though need to be considered in the context of India's very large population. There is more about TB in India. South Africa has the highest estimated number of HIV positive deaths. There is more about TB in South Africa.

The following is the estimated mortality from TB for each of the 30 countries in the main high TB burden list.

This page was last updated in October 2022.
Author Annabel Kanabus

If you have found this page useful please tell other people about TBFacts.org and if you have a website please link to us at https://tbfacts.org/deaths-from-tb/.

Major Sources for Deaths from TB