A million and a half people dying from TB

Each year, for those people dying of pulmonary TB the following can often be true:

“When TB wakes up and gets into the lungs, it eats them from the inside out, slowly diminishing their capacity, causing the chest to fill up with blood and the liquidy remains of the lungs. A wet, hacking cough is evocative of TB. The lungs now in liquid form are sloshing around in the chest. Cough that up, even in microscopic, impossible to see droplets, near other people, and they have a very good chance of getting TB too.”

“Eventually, liquid replaces the lungs, the suffering patients cannot get enough oxygen, and respiratory failure occurs, they can no longer breathe and they drown. It’s painful, it’s drawn out. It’s an awful way to die. But before any of this happens the disease weakens you, diminishes your capacity for work, and puts your family and friends, and anyone else you come into contact with, at risk. Individual death is only part of the problem”.((“McMillen, Christian W. “Discovering Tuberculosis, Yale University, 2015))

The problem of global TB results in the deaths each year of nearly one and a half million people. Deaths from TB are deaths from a disease that for many years has been treatable and curable. More than 30 million people have died since the World Health Organisation declared TB to be a global emergency in 1993.

For the number of people dying from TB in each high burden country see the deaths from TB . For more generally about TB see TBFacts.

Saving people from dying of TB

Saving the lives of people with TB means: 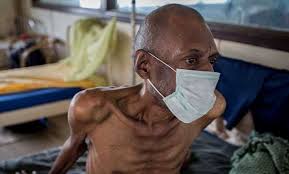 This page was last updated in October 2022.
Author Annabel Kanabus

If you have found this page useful please tell other people about TBFacts.org and if you have a website then please link to us at https://tbfacts.org/dying-tb/.