Types of TB treatment in India

A patient's history of TB treatment

A patient will be in one of three groups based on their history of TB treatment. These groups are:

a) New TB patients - these are TB patients who have never had treatment for TB or they have taken anti TB drugs for less than one month.

b) Previously treated patients - these are patients who have received one month or more of anti TB drugs in the past.

Recurrent TB patients are patients who have previously been considered as successfully treated (cured/treatment completed) and they have subsequently been micro biologically confirmed as still having TB.

Treatment after failure patients are those who have previously been treated for TB and their treatment failed at the end of their most recent course of treatment.

Treatment after lost to follow-up is a TB patient who has previously received TB treatment for a month or more and they were declared lost to follow up in their most recent course of treatment. They have also subsequently been found to be a microbiologically confirmed TB case.

Other previously treated patients are patients who have previously been treated but whose outcome after their most recent course of treatment is unknown or undocumented.

A micro biologically confirmed TB case refers to a patient who is presumed to have TB and who has a biological specimen positive for acid fast bacilli. It is also a patient positive for TB through a quality assured Rapid Diagnostic Molecular test, such as CBNAAT.

The groups, or categories, are similar to, but are not exactly the same as the WHO Treatment categories. 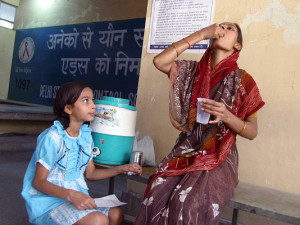 All new TB patients in India should receive an internationally accepted first line treatment regimen (a regimen is the prescribed course of treatment, in this case the TB drugs) for new patients.

The initial intensive phase should consist of eight weeks of the drugs Isoniazid (H), Rifampicin (R), Pyrazinamide (Z) and Ethambutol (E). The continuation phase should consist of the three drugs Isoniazid, Rifampicin and Ethambutol given for another sixteen weeks. This is alternatively written as 2HREZ/4HRE. There will be no need for any extension of the continuation phase.

The drug dosages should be given according to the body weight of the patient. There are four weight band categories.

All patients should receive their daily TB drugs under direct observation (DOTS). Under DOTS (Directly Observed Therapy Short Term) the patient has to take the TB medication in front of a DOTS agent. The DOTS agent is usually a volunteer from the patient’s community, and may be a family member. DOTS does not say which drugs should be taken. DOTS applies when any TB drugs are taken with the patient being observed by a DOTS volunteer.

A fixed dose combination (FDC) is when two or more drugs are combined together in a single pill or tablet.

Fixed dose combinations are helpful as they simplify getting TB drugs and the delivery of DOTS. They may also increase adherence. Individually worked out drug dosing should be only used for patients with toxicities or contraindications to one or more parts of the FDC.

There is more about FDCs.

When it started to provide drug treatment the RNTCP only provided TB treatment on three days a week. In 2014 the RNTCP recognised the need for daily dosing and announced a pilot in five states in December 2014. It was however very delayed.

Three years later in 2017 the pilot was finally due to start. By this time most private sector physicians were providing their patients with a daily TB drug regimen. It was said that the delay in the rollout was “due to delays in procurement of the medicines needed for treatment”.

In February 2017 the Supreme Court directed that after a period of nine months, all new patients should be administered a daily regimen of TB drugs. A TB specialist Dr Raman Kakkar sought a change in the protocol for the treatment of TB. He had claimed that the current dosage practice was “unscientific” and “improper”. It promoted relapse and generated drug resistant strains in the patients. The relapsed cases were harder to treat than first time infections.

It was subsequently said by the RNTCP that:

“Under the new daily drug regimen, TB patients will be given fixed dose combinations (FDCs) - three or four drugs in specific dosages in a single pill - on a daily basis. The drugs will also be administered in a more scientific manner, according to the patient’s weight. The biggest advantage for the patient under the new regimen will be reduced pill burden, as instead of seven tablets, patients need consume only 2 or 3 tablets, according to their weight band” Senior RNTCP officials 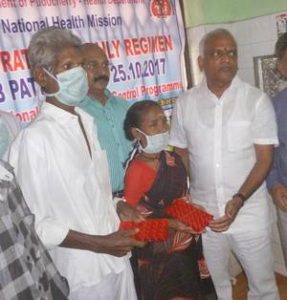 However, as the drug regimen goes from three times a week to daily, more monitoring of patients may be required, as with the increased doses the patients may have more side effects.

In October 2017 the health minister Malladi Krishna Rao gave TB patients in Puducherry the first TB drugs to be taken by patients on a daily basis. 1 The quantity of the drugs to be taken will also depend on the patients weight. Each patient will receive through the RNTCP a month’s supply of drugs. The patients will be supervised taking the drugs using the DOTS strategy. The daily regimen will have to be followed by patients for six to eight months.

Each patient with TB in India can now receive, through direct benefit transfer, R500 ($8) a month for food. This is because under nutrition is a risk factor for TB in India. There is more about Nutrition & TB and Food & TB.

There is also now money for private sector providers and informants.

It is with previously treated patients that there have been most changes over the last few years to the recommended treatment. Previously streptomycin was given to many previously treated patients and many patients lost their hearing as a result of the side effects of the drug. In 2017 new Guidelines on the Programmatic Management of Drug Resistant Tuberculosis in India were published. 2 The new guidelines in 2017 replaced previous documents including the RNTCP Technical & Operational Guidelines 2016 and the Guidelines for use of Bedaquiline under Conditional Access through RNTCP. The PMDT is a very comprehensive document. There is more about the PMDT on the page on drug resistant TB in India.

In December 2018 an announcement was made in India that all previously treated patients should receive a standard six month first line treatment if no resistance was detected to either rifampicin or isoniazid.3 It is however very important to ensure that drug susceptibility testing is carried out to ensure that the previously treated patient does not have any drug resistance. There is more about Drug Resistant TB in India.

The World Health Organisation (WHO) also changed their advice for the treatment of previously treated patients in 2017.4 Their advice now is that patients who require retreatment should never be given streptomycin unless it is part of a regimen for drug resistant TB when no other drug is suitable.

Only an outline can be provided here of the treatment for Drug Resistant TB. It is very important that such treatment should only be provided under the guidance of an experienced doctor.

In March 2018 a shorter MDR TB regimen (9-11 months duration) was introduced for patients diagnosed with Rifampicin resistance that would be continued or switched to a longer regimen based on secondline LPA results.

Again in 2018 access to the Bedaquiline containing regimen was expanded to all states. This was after an initial trial in 5 states (Asssam, Delhi, Gujarat, Maharashtra and Tamil Nadu).

A Delamanid containing regimen has also been implemented in 7 states. Although by the end of 2018 only 41 patients had been started on such a regimen. 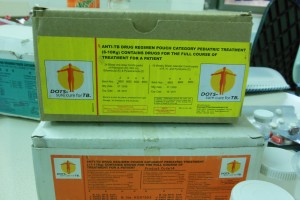 The TB drugs for RNTCP patients are supplied in an individual patient wise box which contains the entire course of treatment for the patient. In each patient wise box there are two pouches. One is for the intensive phase and the other is for the continuation phase.

The response to therapy in patients with pulmonary TB, both new and retreatment patients, should be monitored. This should be done by follow-up sputum microscopy/culture (one specimen) at the time of completion of the intensive phase of treatment and at the end of treatment.

If you have a web site and you have found this page useful, then please link to us at https://tbfacts.org/tb-treatment-india/.