The natural history of TB in people with HIV 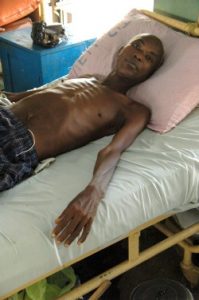 A patient with HIV and TB in hospital in Nigeria © DAHW

When people have a damaged immune system, such as people with HIV who are not receiving antiretrovirals (ARVs), the natural history of TB is altered. Instead of there being a long latency phase between infection and development of disease, people with HIV can become ill with active TB disease within weeks to months, rather than the normal years to decades.

HIV positive people with pulmonary TB may have the classic symptoms of TB. But many people have few symptoms of TB or even less specific ones. In addition, up to a fifth of people may have normal chest X-rays. HIV positive people with TB may indeed frequently have so called “sub clinical” TB. This is often not recognized as TB and subsequently there can be delays in both TB diagnosis and TB treatment.

People living with HIV are more likely to have extrapulmonary TB. Therefore it is much more common in countries with a high HIV prevalence, such as South Africa.5

Since 2007 TB has been the leading cause of death from a single infectious agent, ranking above HIV/AIDS.

Diagnosing TB and HIV when there is co-infection

Because of the limitations of current TB tests, it is even more difficult to diagnose TB in HIV positive individuals, than to diagnose TB in people without HIV infection. Many people with HIV will have a false negative result from a TB sputum smear test. This can result in a large number of cases of active TB disease going undiagnosed.

By contrast the diagnosis of HIV in people with TB should always be straightforward because of the availability of quick and cheap point of care diagnostics for HIV infection.

According to the World Health Organisation (WHO) improvements are still needed globally in the detection of active TB disease among PLHIV, the coverage of HIV testing among TB patients, and the enrolment of HIV positive TB patients in ART.

Treatment outcome data gives a success rate of 85% for TB and 75% for HIV associated TB.

Starting treatment for either HIV or TB

The decision to start treatment for either HIV or TB when there is co-infection, should take into account a number of factors including:

The provision of HIV ARV therapy and anti TB drug treatment at the same time involves a number of potential difficulties including:7

For adults with co-infection, who need to receive both antiretrovirals and TB drugs, the WHO guidelines recommend starting ARVs within the first 8 weeks of starting TB treatment. This should be two weeks in individuals who have a CD4 count of less than 50. It is not now considered necessary to delay the initiation of ARV therapy until TB treatment has been completed.8

The stigmas of TB and HIV/AIDS

The stigmas of HIV and TB have come full circle.

In the early days of the HIV/AIDS epidemic, people were said to have died of TB when they had actually died of AIDS.9

Now in the townships of South Africa, people will enter the shack (township home) of someone with HIV, but they will stop at the door if the person has XDR TB.10 There is more about TB in South Africa.