TB symptoms are very variable and depend on the type of TB. It is very difficult to diagnose TB just from the symptoms, as the symptoms can often be the same as those of another disease. So to diagnose TB it is always necessary to do at least one TB test.

The general symptoms or signs of active Tuberculosis include weakness or feeling very tired, losing weight without trying, a lack of appetite, chills, fever (a high temperature of 38C or above) and night sweats.1 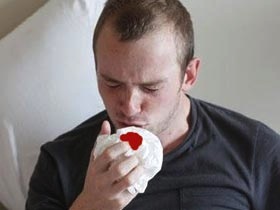 Coughing up blood can be a symptom of TB

Pulmonary TB is TB in the lungs. One of the early signs of pulmonary TB is often having a bad cough that lasts longer than three weeks, having pain in the chest, and coughing up blood or phlegm from deep inside the lungs.2

The general symptoms are the same as for pulmonary TB, but there can then be specific symptoms relating to the particular site or sites in the body that are infected. 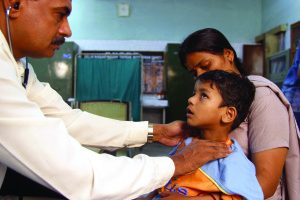 A doctor checks a child for symptoms of TB © Gary Hampton

Lymphadenitis is the inflammation and/or enlargement of a lymph node and is a common response to a variety of infections particularly in children.4 The only symptoms may be painless slowly enlarging lymph nodes, as there are often no general symptoms. The swollen lymph nodes are often in the neck area, although they can be in the groin.

TB infection of the lymph nodes in the neck is sometimes referred to by the name Scrofula, or TB adenitis.5

Spinal TB is also known as TB Spondylitis or Pott Disease. The symptoms of Pott disease depend on the stage of disease, and the affected site, but back pain is the earliest and most common symptom.7

TB meningitis does not start with classic meningitis symptoms. It begins with vague, general symptoms of aches and pains, a fever, and generally feeling unwell. This lasts for anywhere from about 2 to 8 weeks. Only then do the more obvious symptoms like vomiting, severe headache, a dislike of lights, neck stiffness and seizures occur.8

Gastrointestinal TB, Abdominal TB or TB of the Kidneys

The symptoms of abdominal TB can be abdominal pain, diarrhea, and bleeding from the anus or rectum. As with a number of other types of TB, the symptoms will depend on the exact area that is affected.9 For example TB in the kidneys can cause blood in the urine.

Symptoms of TB in children

In a similar way to adults the symptoms of TB in children depend on the type of TB that the child has. Children usually have pulmonary TB and the symptoms are usually a chronic cough, a fever and failure to thrive or weight loss.

If you have found this page useful please tell other people about TBFacts.org and if you have a website please link to us at tbfacts.org/symptoms-of-tb/