1940 History - The development of PAS

The history of TB drugs can be considered as starting in 1940 with a biochemist Frederick Bernheim working on his own at Duke University in North Carolina in the United States. He believed that the second world war would result in a massive increase in the suffering and deaths from Tuberculosis. He also knew that there was no effective TB treatment but what could he do about it? He carried out a number of experiments and found that the simple asprin played a vital role in the life cycle of the tuberculosis germ.

On 30th August 1940 Bernheim had his discovery published in the journal Science. As soon as he received some copies he sent one to his friend and colleague Jorgen Lehmann. This paper was sent in the ordinary post:

“braving the Atlantic ocean with its patrolling battleships and U-boats, on its slow journey to Gothenburg in Sweden”1

Jorgen Lehmann was a Scandinavian doctor and as he himself said:

“One morning in 1940 I was sitting on my couch in my office at the Central Laboratory when I received the morning post. There was a small brown envelope from my friend the biochemist and pharmacologist Frederick Bernheim. In this simple brown envelope I found a tiny article printed on just one page. What it said was that if you added one milligram of salicylic acid (asprin) to tuberculosis bacteria you could stimulate the oxygen uptake of the bacteria by more than one hundred per cent.”1

Suddenly Lehmann experienced a moment of understanding that would change his life. What if the humble asprin molecule was the key to the greatest of medical mysteries, he asked himself? What if he could take this key and open the door to the cure for tuberculosis? If salicylic acid stimulated the oxygen uptake of the bacteria, then could another form of salicylic acid inhibit the metabolism of Mycobacterium tuberculosis and stop it reproducing? However Lehmann was busy with an anticoagulant drug he was developing, and it was to be 1943 before he returned to the subject of Tuberculosis and asprin.

In 1943 he wrote to the research director of the firm Ferrosan and proposed the production of two different salicylic acid derivatives.2 PAS turned out to be the most active of the many molecules that were subsequently tested. PAS did however turn out to be very difficult to synthesize. It was not until December 1943 that Ferrosan sent 13 grams of the compound to Lehmann. On New Year’s eve Lehmann wrote to Ferrosan announcing that PAS substantially inhibited the growth of M. tuberculosis. 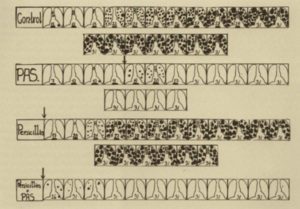 The results of an early animal experiment with PAS

In 1944 experiments began on rodents. Even before the experiments were completed Professor Lehmann wanted to start using PAS in humans, as PAS had negligible toxicity. The first patient received an oral dose of PAS in October 1944.2 There was then a small clinical trial involving 20 patients and in January 1946 Lehmann reported that the majority had responded well with a drop in temperature, weight gain and general improvement.

The development of PAS was overall beset with delays and difficulties. There was no sense of urgency and there was widespread scepticism. Few people outside of Sweden knew about PAS.

Meanwhile the development of Streptomycin was also progressing but at a much faster rate.

1943 History - Waksman & the development of Streptomycin

Selman Waksman was a soil microbiologist who in 1939 was working at the Department of Microbiology at New Jersey Agricultural Experiment Station, at Rutgers University, New Brunswick. He studied the effect of soil microbes on each other. Over the previous 25 years Waksman, his assistants and some graduate students, had obtained and published information not only about fungi, but also about the methods and techniques they used to obtain the information. Along with studying fungi he also studied the actinomycetes. Actinomycetes are a group of microbes which can be considered as intermediary between bacteria and fungi.

Waksman had found in his previous studies of the microbiological affect of the soil that actinomycetes could exert a very peculiar effect on certain soil bacteria which resulted in their growth being inhibited. So he then turned his attention from studying the soil to specifically looking at the sensitivity of the TB organism to various actinomycetes.

In 1939 he began a systematic search for microbes found in the soil that had the capacity to prevent the growth of disease producing bacteria. Various preliminary studies of the production of antibiotics by actinomycetes resulted in the isolation of actinomycin in 1940 but it was extremely toxic.3 This was followed two years later by streptothricin which was also found to have significant toxicity.

So the search went on and in September 1943 another compound named streptomycin was found which was less toxic to animals but which otherwise had some similar properties. The first public announcement of the isolation of the antibiotic was made in a paper in January 1944 4. Before the end of the year its activity against the TB organism had been demonstrated. In less than two years from the date of its isolation extensive investigatory work had been carried out.

The announcement of the effectiveness of streptomycin upon the TB organism immediately attracted the attention of Dr W H Feldman and Dr H Corin Hinshaw of the Mayo clinic. They were interested in finding antituberculosis agents for testing in experimental animals. 5 Dr Wakman agreed to provide the Mayo Clinic with some of the crude preparation of streptomycin. He also arranged for the chemical and pharmaceutical company Merck, to produce a large quantity of streptomycin which would be required for more extensive trials.

The first clinical treatments of TB with streptomycin were carried out at the Mayo Clinic in the winter of 1944/45. November 20th 1944 was the day on which streptomycin was first administered to a human being for the treatment of tuberculosis. This was just a few weeks after the first patient had been treated with PAS. The patient was discharged from the sanatorium on July 13th 1947 with a diagnosis of apparently arrested pulmonary tuberculosis.

There were however some serious limitations to the use of streptomycin. These included the fact that it needed to be painfully injected, and after long term therapy the development of resistance took place. There was also a particular toxicity of the drug which led to a loss of hearing or the sense of balance in some patients.

However such was the interest in streptomicin that by 1949, just five years since the isolation of the drug, there was a literature of 1,800 references covering reports of investigations in many countries and languages.6 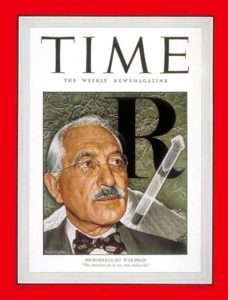 In 1945 Waksman started to give interviews to the press describing himself as the “discoverer” of streptomycin.7 He also described Albert Schatz as “one of his assistants”. Albert Schatz was one of the graduate students who had worked with Waksman. Although he only worked with Waksman for a relatively short time, he had performed most of the laboratory experiments leading to the isolation of streptomycin. He was also the first author on the original publication and his name was on the patent application as one of the inventors.

Waksman was to receive numerous honours as a result of his work on streptomycin and in 1949 his portrait was on the cover of Time magazine. In 1949 Schatz decided to write to Waksman about various matters concerning the streptomycin patent, the royalties, and his various dealings with Merck and Rutgers. Waksman and Schatz went to court but settled in 1950. Schatz was accorded the legal status of “co-discoverer” and given 3% of the royalties.

It was said in the speech awarding Professor Waksman the prize, that the 1952 Nobel Prize for Physiology or Medicine had been awarded to him for:

“your ingenious, systematic and successful studies of the soil microbes that have led to the discovery of streptomycin, the first antibiotic remedy against tuberculosis”.8

It was originally planned that the prize would be given specifically for the discovery of streptomycin, but this was changed as a result of an objection by Schatz.7

So which was the first TB drug, PAS or Streptomycin?

In 1951 in an amazing coincidence three pharamaceutical companies Bayer Chemical in Germany, and Squibb and Hoffmann-LaRoche in the United States almost simultaneously made the discovery of what was to be the next major drug for the treatment of TB, isonicotinic hydrazide, soon to be renamed isoniazid. It was ten times more potent than any previously tested drug and it appeared to be non toxic. In addition it had been described in a published report by chemists many years earlier. This meant that isoniazid could not be patented. So anyone could make it and sell it, and it was not difficult or expensive to produce.9

By the time that isoniazid became available attention had turned to how the drugs needed to be used in combination in order to avoid the development of resistance. Triple therapy of isoniazid, streptomycin and PAS became the standard triple therapy for the next 15 years until the availability of rifampin in the 1960s.10 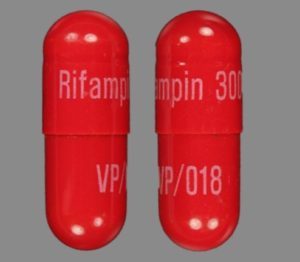 The rifamycins were discovered in 1957 in Italy when a soil sample from a pine forest on the French Riviera was brought for analysis to the Lepetit Pharmaceuticals research laboratory in Milan, Italy. A research group led by Professor Piero Sensi and Dr Maria Teresa Timbal then discovered a new bacterium. This new species was of considerable scientific interest as it was producing a new class of molecules with antibiotic activity. Rifampin was first used clinically in 1966.

Meanwhile ethambutol had been discovered in 1961. Pyrazinamide had also become available but was only used in combination with other antituberculosis medications such as isoniazid or rifampin.

But after the development of the rifamycins the history of TB drugs effectively came to a halt, with no new TB drugs being developed for the next fifty years.

Bedaquiline also became available in 2012. It is also used to treat drug resistant TB when no other treatment is available. There have however been some difficulties with both of these drugs.

If you have found this page useful please tell other people about TBFacts.org and if you have a website please link to us at tbfacts.org/history-of-tb-drugs/.