When does the history of TB start?

A history of Tuberculosis (TB) needs to start with its discovery at least 35,000 years ago and probably closer to 2.6 million or even 3 million years ago.1 2 3

Previously it has been suggested that there is an animal origin for TB. But recent studies using molecular genetics now suggest that human TB predated that in other animals, including cattle, when it is known as bovine TB.

Mycobacterium tuberculosis complex (MTBC) may have emerged as a human pathogen in Africa. It then may have colonized the world accompanying the migrations of modern humans out of Africa some 70,000 - 100,000 years ago.4

History of TB in Ancient Times

The earliest historical references to TB in Egypt are in a medical papyrus dated to 1550 BC.5 Among Egyptian mummies spinal tuberculosis, one particular type of TB, known as Pott's disease has been detected.

Hippocrates in Book 1, Of the Epidemics (410-400 BCE) described a disease of "weakness of the lung" with fever and cough which he referred to as phthisis. Phthisis was descibed as the commonest disease of the period and usually as being fatal.

"Early in the beginning of spring, and through the summer, and towards winter, many of those who had been long gradually declining, took to bed with symptoms of phthisis .. Many, and in fact, most of them died."

Hippocrates recognised the predilection of the disease for young adults, saying that:

"Phthisis makes its attacks chiefly between the age of eighteen and thirty five."

History of TB in the Middle Ages

The middle ages is usually defined as being the one thousand years that followed the fall of the Roman empire and preceded the renaissance in Europe. During this period Tuberculosis was often referred to as Scrofula.6

It was also called the Kings Evil with the Kings Touch being another one of the names for TB. There were many different names for TB used over the years. It was widely believed that the kings of England and France could cure TB by simply touching affected people.

"a regular custom of touching the scrofulous .. developed in the French royal court probably in Louis IX's reign" (1226-1270) or before.7

History of TB in the 17th Century

Although Tuberculosis was present in Europe in the middle Ages, it was in the seventeenth century that the disease reached astounding epidemic proportions. 8 By the mid seventeenth century it was recorded in the London Bills of Mortality that one in five of the deaths in the city was due to consumption. From the seventeenth to the nineteenth century in England, like the other great towns and cities of Europe and America, it swept on in a continuing epidemic of such monstrous proportion, the disease was called the White Plague of Europe.9 But the history of TB is that in the later part of the 17th century Tuberculosis mortality slowly decreased.

In 1650 doubts had been expressed as to the contagiousness of phthisis, by the faculty of Paris. Soon TB spread over Northern Europe. Northern physicians seem to have been led to believe that the disease was due to a constitutional hereditary defect rather than due to contagion by the fact that it was particularly common and severe in certain families.10

In 1679 Sylvius de la Boe, an Amsterdam physician, in his work Opera Medica, was probably the first to use the term tubercles in phthisis of the lung which he called tubercula glandulosa. In addition Sylvius described the association between phthisis and a disease of the lymph glands of the neck called scrofula.

TB in the 18th Century

Tuberculosis mortality probably peaked in England in 1780, at a death rate of one thousand, one hundred and twenty for each one hundred thousand living people each year. This means that one and a quarter percent of the entire population died of the disease each year.11 It is not known how many people got TB but survived it in the 18th century. By the end of the 18th century one in every four deaths in England was attributable to the disease. Then a major reversal occurred and death rates began to fall.

At this time knowledge of disease was derived almost exclusively from its symptoms. But dissatisfied with vague explanations of the disease physicians started to search for more concrete knowledge by dissecting the bodies of dead patients. In 1700 John Manget was carrying out such an autopsy when he observed tubercles so small as to resemble "millet seed" present in all parts of the body. This type of disseminated disease is now called "miliary" tuberculosis.

History of TB in the 19th Century

Around the turn of the 19th century, the death rate worldwide was estimated at 7 million people a year, with 50 million people openly infected. London and New York were two of the worst affected cities.12 Consumption was probably the most common killer of American colonial adults. It accounted for more than 25% of deaths in New York city between 1810 and 1815.13

In the late nineteenth century the level of TB was so high in Europe that many people with TB moved to what were perceived as the favourable climates of distant colonies such as South Africa. There is more about the history of  Tuberculosis in South Africa.

In 1803 a French doctor Rene Laennec announced that he had found tubercles in all organs of the body, with muscle and body included. Some doctors believed at this time that phthisis corresponded to at least six independent diseases. But Laennec soon became convinced that the various lesions found in the phthisical lung were in reality different phases in the evolution of the same pathological process.

In 1804 Laennec delivered a famous lecture in which he set forth his revolutionary views on the genesis of pulmonary TB.

In 1816 physicians would perform physical examinations by such means as immediate auscultation which required the physician to place their ear directly on the patient to listen to internal sounds. Laennec invented the first stethoscope to amplify the sounds as well as to reduce physical contact between the physician and their patient.

In 1839 J.L. Schonlein suggested that the word "tuberculosis" be used as a generic name for all the manifestations of phthisis, since the tubercle was the anatomical basis of the disease. This brought to an end the multiplicity of names for TB.

In 1854 the German physician Dr Hermann Brehmer opened his sanatorium in Gorbbersdorf, Silesia in an abandoned hydrotherapeutic sanatorium. German sanatorium doctors particularly valued the open air rest treatments, where the emphasis was put on remaining outdoors in all weather conditions combined with a rich diet.14 Later in 1885 Dr Edward Livingston Trudeau started the first sanatorium in the United States.15

Some people had considered that TB might be a contagious disease. But this was only proved in 1865.  Jean Antoine Villemin, an army doctor in Paris, showed that it could be transmitted from tuberculous animals to healthy animals by inoculation.

Who died from TB?

Back in the 1800s if you had to die consumption was the way to go. It claimed many famous victims, including the poets John Keats and Robert Louis Stevenson and the novelists George Orwell and the Bronte sisters. It provided a romantic demise for the heroines of operas such as La Traviata and La Boheme.16

A pneumothorax is a collapsed lung and it  occurs when air gets into the space between a lung and the chest wall. The air pushes on the outside of the lung and makes it collapse. The creation of an artificial pneumothorax was probably the first surgical treatment for TB. The Italian doctor Carlo Forlanini who was born in 1847 had always had an interest in Tuberculosis. Having carefully considered the theory of what he planned to do, Forlanini proceeded in 1888 to induce the first artificial pneumothorax in a patient with TB. Subsequently a number of patients appeared cured.17

Robert Koch & his contribution to the History of TB 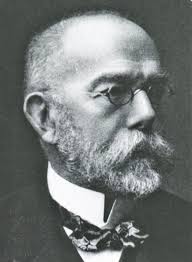 Robert Koch was an important person in the history of Tuberculosis

In March 1882 Robert Koch proved conclusively that the cause of Tuberculosis was infection by a specific micro-organism, the tubercle bacillus which he had isolated. His discovery made the headlines of the world's press. Subsequently Paul Ehrlich developed an improved staining method. With further later improvements, the result was the Ziehl-Neelsen stain. 18

Koch also laid down the conditions, known as Koch's postulates, which must be satisfied before it can be accepted that particular bacteria cause particular diseases.

Then in 1890 Koch announced that he had discovered a substance that could "in some cases" protect against tuberculosis and even "under certain circumstances" cure the disease. 19 The immediate effect of Koch's announcement was electrifying. 20 21 This substance was Tuberculin. But it soon became clear that Tuberculin killed many more patients than it helped. The treatment was discredited almost everywhere and Koch was severely criticised.

The Decline of Consumption

Consumption declined slowly after the mid nineteenth century. Although on the continent and in the United States it peaked several decades after England. It remained until the 1940s the commonest cause of death among those about to enter what should have been the most productive period of their lives. 22 So unexpected was the decrease in mortality that occurred during the second half of the nineteenth century that it remained unnoticed for several decades.23

History of TB in the 20th Century

Around 1908 a new use was found for Tuberculin. But this was not for the treatment of TB, but instead it was for the diagnosis of TB.25 The test was named after the French physician Charles Mantoux

Starting around 1956 the Madras Experiment was carried out in India to determine whether treatment in a TB sanatorium provided any benefits as compared with treatment at home. Patients were followed up for five years, and the result showed that there was no significant differences between the two groups.

The end of the sanatoriums

The Madras experiment marked the end of the sanitoriums with most of them closing or radically changing the services they provided.26 The Trudeau sanatorium closed in 1954.

The end of surgery

it was difficult for thoracic surgeons to appreciate that the surgery of pulmonary tuberculosis had outlived its usefulness ... Yet a completely new era was just upon them: by 1955 collapse therapy had given way to resection surgery, and by 1958 resection had in its turn been replaced by long term chemotherapy and had vanished, never to return ((R.Y. Keers, Pulmonary Tuberculosis A journey down the Centuries, Bailliere Tindall, 1978))

Signs of single drug resistance had been seen as early as 1948 but then there started to be reports of strains of the disease that were resistant to two or even more drugs.

The greatest disaster that can happen to a patient with Tuberculosis is that his organisms become resistant to two or more of the standard drugs. The development of drug resistance may be a tragedy not only for the patient himself but also for others, for he can infect other people with his drug resistant organisms. Sir John Crofton (1959)

In 1993 the World Health Organisation (WHO) declared Tuberculosis to be a public health emergency. This was said to have ended a period of prolonged global neglect.27

In 1994 WHO announced a new strategy called DOTS, for the global control of TB.

2020 Targets of the END TB Strategy

The WHO TB report for 2019 showed that the world was not on track to reach the 2020 targets of the END TB Strategy.

If you have found this page useful please tell other people about TBFacts.org and if you have a website then please link to us at https://tbfacts.org/history-tb/.