What is a sanatorium?

German physicians seem to have preferred the latter word, perhaps to put forward the view that cure in a sanitorium implies a positive therapeutic intervention. And not merely the beneficial effects of life in a healthy environment. Sanitoriums have mostly been associated with the treatment of Tuberculosis in the late nineteenth and early twentieth century, before the development of TB drugs.

The origin of the sanatorium movement

It was George Bodington, a British doctor, who in 1840 published "An Essay on the Treatment and Cure of Pulmonary Consumption". In this he vehemently attacked the:

meagre system of medical treatment of consumption in general use at the present day, the utter uselessness of which is so well known 2

He condemned the use of the two popular drugs of the day, digitalis and tartar emetic, as well as the practice of shutting patients up in a close room from which fresh air was as far as possible excluded. He proposed a vastly different regimen based upon:

the air out of doors, early in the morning either by riding or walking. The patient ought never to be deterred by the state of the weather from exercise in the open air.

In addition to fresh air he allowed his patients 'a nutritious diet of mild, fresh animal and farinaceous food, aided by the stimulus of a proper quantity of wine, having regard to the general state and condition of the patient' 3

The medical establishment did not appreciate his work and in July 1840 the eminent medical journal the Lancet dismissed his ideas. It was only in 1882 when writing his obituary that the Lancet gave credit to his work.

How long did the sanatorium movement last?

The sanatorium movement is a distinct period in the history of tuberculosis. It started gradually, with a number of individuals leading the way. They set up sanatoriums based on their own beliefs and experiences with the disease. The movement spread to every continent throughout the world.

It ended when chemotherapy was developed that cured the disease. Admission to sanatoria declined, and the sanatoriums began to close. By the middle of the twentieth century most had been closed and had been converted to other uses or even demolished.

Where was the first TB sanatorium?

The work of the German doctor Hermann Brehmer was to mark a turning point in the treatment of TB throughout the world. He had himself recovered from TB whilst on an expedition in the Himalayan mountains.4

His belief in the beneficial effects of life at high altitudes had been encouraged by his teacher J. L. Schonlein, the doctor who had previously suggested that the name "tuberculosis" be used as a generic term for all the manifestations of phthisis. The explorer Alexander von Humboldt had also assured him that the disease did not exist in mounainous countries.4

So in 1854 Brehmer established an institution for the treatment of tuberculosis at Gorbersdorf in the mountains of Silesia. By 1859 after considerable difficulties he had built a Kurhaus ("spa house" or  "health resort") with 40 rooms, entertainment rooms and kitchens.5

His therapeutic regimen incorporated mountain air; exercise; abundant feeding; including strong Hungarian wine and cognac; rainbaths and ice-cold forest douches requiring the patient to ascend in the woods and stand under a waterfall of specified force and caliber under the direct supervision of Dr Brehmer himself.

During the second half of the nineteenth century numerous sanatoria were set up throughout Europe. The belief in the benefit of altitude and climate tended to persist.5

A sanatorium was established in Davos, in Switzerland, that made Switzerland the major TB treatment site and health resort in Europe.

TB sanatoriums in the United States

The first American sanatorium for pulmonary tuberculosis was established in 1875 by a Bavarian, Joseph Gleitsmann in  Ashville North Carolina.

Eleven years later in 1885 the Adirondack Cottage Sanatorium at Saranac Lake was founded by Edward Livingstone Trudeau after he found that his symptoms disappeared in the fresh air. This quickly became the best known institution of its type in the United States. It was later renamed the Trudeau Sanatorium afer the death of Dr Trudeau.

The development of the sanatorium movement

The sanatorium movement developed quickly. Between 1900 and 1925 the number of beds in sanatoriums across the United States increased from roughly 4,500 to almost 675,000.6 But:

these places never catered for the vast majority of cases .. although provision increased a lot in the early 20th century it was never really enough to cope with the demand.

Also, many ailing people lacked the money they needed to buy themselves entry into facilities, or to supprt them and their families while they were there.

Life in a sanatorium 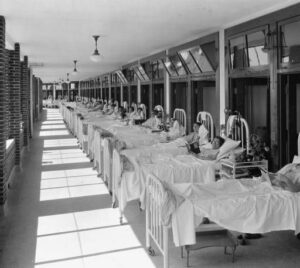 TB patients on the porch of the Waverly Hills TB sanatorium

Rest was the foundation for all tuberculosis treatments. Patients could be expected to spend several hours per day on the porches, or solariums. The original porches ran the length of the building and were not enclosed with glass. Screens were the only things separating the patients from the weather and, even in freezing cold conditions, the patients would be wheeled out each day to partake of the fresh air.7

All patients who could stand the cold weather were expected to spend as much time as possible outside, some even sleeping there year-round. In winter patients would be dressed warmly in flannel, lying underneath many blankets. Each day, patients were given long rest breaks when they were not allowed any form of entertainment. They were not allowed to read or even talk, they could do nothing but sleep. For some patients, walking exercises on the winging road of the campus allowed some TB patients to be out in the freah air expanding their lungs.

But the Director of the sanatorium in the 1920s did report on some of the recreation provided for patients. "There is a picture show every Wednesday night and prayer meetings, Sunday school and church services. We also have a department of occupational therapy where the patients do weaving, basketry, tool leather work etc." Letter writing was another favourite occupation.

and from another sanatorium:

The basic remedy was "bed rest" in its most stringent form: 24 hours lying flat. Meals were spooned to each patient by registered nurses, bed baths and the universal bed pans were imposed on those who looked and felt normal but who had shadows, even small shadows, on their chest X-ray films. The average patient spent more than a full year in bed, many others much more.8

By the early 1950s it was clear that not everyone who had TB could be treated in a sanatorium or hospital that provided strict bed rest. There were far too many people with TB, and too few sanatorium beds, particularly in less developed countries such as India. But with the development of TB drugs, was bed rest still necessary? Was bed rest still an advantage? The answer was to come with the "Madras experiment".

In 1956 the clinical researcher Dr Wallace Fox, moved to India for 5 years as director of the Tuberculosis Chemotherapy Centre in Madras. One of the other researchers he worked with said:

His greatest contribution in the field of tuberculosis in India and other developing countries was the randomised controlled trial of home and sanatorium treatment of pulmonary tuberculosis.

This demonstrated that treatment at home is as effective as sanatorium treatment, not only in the initial success rate but also in the subsequent relapse rate.9

It also showed that:

The Madras experiment was probably responsible for closing down sanatoria worldwide.

The end of the sanatorium movement

One by one the great sanatoria became redundant. Trudeau's sanatorium closed in 1954. In Sweden every other sanatorium except the Renstrom closed their doors.

Some were adapted for other uses, whilst others such as the Essex Mountain Sanatorium were demolished.10

In the early morning hours of April 10th, 2002, the final building standing on the property was destroyed. Destruction of the historic hospital was now complete, and the sanatorium passed silently into history.

This page was last updated in August 2022.
Author Annabel Kanabus

If you have found this page useful please tell other people about TBFacts.org and if you have a website please link to us at tbfacts.org/sanatorium/.