What is latent TB? What are the symptoms of latent TB?

Latent TB occurs when a person has the TB bacteria within their body, but the bacteria are present in very small numbers. They are kept under control by the body’s immune system and do not cause any symptoms. Latent TB is one of the two types of TB. The other type is TB disease. This is often known as active TB or Tuberculosis.

People with latent TB do not feel sick and are not infectious. They cannot pass the TB bacteria on to other people. In addition they will usually have a normal chest x-ray and a negative sputum test. It is often only known that someone has latent TB because they have had a TB test, such as the TB skin test.

How many people globally have latent TB?

It is not known how many people have latent TB but it has been estimated that about a quarter of the global population has been infected with TB.1

There are two types of test that can be used. These are the TB skin test (TST) and the newer IGRA blood test. In countries where there is a high level of TB (such as the high burden TB countries) the majority of people may have latent TB.

It is not recommended that everyone with latent TB infection (LTBI) should have TB treatment. Rather that certain “target” groups should receive treatment. The main “target” groups considered by the World Health Organisation (WHO) to be most at risk from progressing from latent to active TB include people in low TB burden countries:

In high TB burden countries the populations that are most strongly recommended for the treatment of latent TB infection are people living with HIV, and children under five who are household contacts of pulmonary TB cases.2 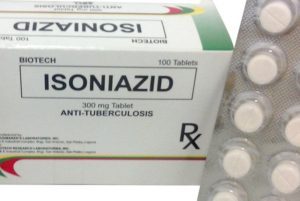 Isionazid is one of the drugs used to treat latent TB

Any adverse effects of taking the drug were also noted and compared. There was a then long period of follow up to see who developed active TB.3

The initial human studies of isoniazid  preventative therapy established that prolonged therapy with isoniazid was effective in reducing subsequent active TB infections. The optimum length of treatment was however unclear but the most common recommendation was for a treatment length of nine months.

Currently the American CDC recommends one of the following three regimens for the treatment of latent TB.4

In 2019 the results were reported of a further analysis of 2 clinical trials looking specifically at side effects. An important problem limiting the treatment of latent TB infection is the occurrence of adverse events with isoniazid. As a result of this further analysis it was recommended that in patients without contraindications, rifampicin is likely to be the safest TB infection treatment option.5

In 2018 the results were announced of the ACTG 5279 study.6 This was a phase 3 clinical study which showed that a one month regimen to prevent latent TB developing into active TB was at least as effective as the current recommended regimens of nine months for people living with HIV. Also, adults and adolescents in the trial were more likely to complete the short course regimen.

The short course regimen consisted of daily doses of the drugs rifapentine and isoniazid.

Among people with latent TB infection, HIV infection is the greatest risk fact for progression from latent TB to active TB disease.

It was said that:

“These results have the potential to dramatically change clinical practice by offering people living with HIV who are at risk of developing active tuberculosis an additional, shorter duration prevention option that is safe, effective and more convenient. This study also will inform future research on prevention of tuberculosis disease among HIV negative people at risk for developing active tuberculosis”NIAID Director Anthony Fauci

Globally in 2015 there were an estimated 1.2 million children aged under 5 who were household contacts of bacteriologically confirmed pulmonary TB cases. These children were all eligible for TB preventative treatment. However, only 87,236 children in this age group (7.1%) were reported to have been started on TB preventative treatment based on the data that WHO received from 88 countries.

A total of 910,124 HIV positive people who were newly enrolled in HIV care were started on TB preventative treatment in 2015. This was based on data from 58 countries. South Africa accounted for the largest share (45%) of the total in 2015 as in previous years, followed by Malawi, Mozambique and Kenya. Ten countries reported data for the first time including Kenya.

It is estimated that 80% of the population of South Africa had latent TB in 2011. The highest prevalence of latent TB infection, estimated at 88%, occurred among people in the age group 30-39 in township situations and informal settlements. Townships and informal settlement conditions are characterised by overcrowding and low socio-economic status, all of which provide fertile ground for TB infection and disease.7 There is more about TB in South Africa.

It is estimated that 40% of the population of India has latent TB.8 There is more about TB in India.

If you have found this page useful please tell other people about TBFacts.org and if you have a website please link to us at tbfacts.org/latent-tb/