Tuberculosis continues to be a disease of major importance in South Africa. An estimated 328,000 South Africans became ill with TB in 2020, and an estimated 61,000 people died from TB.1

As well as being driven by HIV, the TB burden is also driven by poor living conditions and late presentation to health facilities.

The South African government is making major efforts to combat both HIV and TB as set out in its National Strategic Plans (NSPs).

At the launch of this national strategic plan (NSP) the South African Government said:

"We have made major gains in terms of treating millions of people living with HIV & TB, slashing the death toll due to these infections, and reducing the number of new infections. However, there is still a great deal to be done"

The Treatment Action Campaign initially refused to accept the plan.2 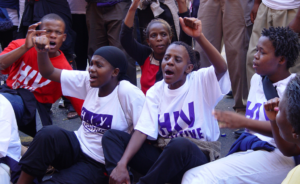 The overall goal of this NSP is the elimination of HIV, TB and STIs as public health threats by the year 2030. The approach taken in this latest National Strategic Plan is to intensify efforts in the geographic areas that are most affected by TB. In addition the highest impact interventions are to be used in these areas. There is very little mention of drug resistant TB.

Comprehensive prevention and care for TB will be provided countrywide but intensified concentrated efforts will be made in the 19 districts with the highest TB burden. In these high burden districts the aim is a saturation of high impact prevention and treatment services.

The 19 districts with the highest TB burden in 2015 when the NSP was developed were:

There is more about these districts on the TB Statistics for South Africa page.

The Key Populations for TB are:

It was found that South Africa has made significant progress towards meeting the 90-90-90 targets set by UNAIDS. But a lot still needs to be done in terms of finding people with TB as well as reducing TB related deaths.

South Africa has also committed to the Global Plan to End TB 2016 - 2020. Set by the Stop TB Partnership this involves implementing the 90-90-90 strategy for TB. Three main targets have been set.

Target 1 is that 90% of all TB cases should be found and given effective treatment.This requires early detection and the prompt treatment of 90% of people with TB. This includes both drug susceptible and drug resistant TB. It also means 90% of people who require preventive therapy. By improving the rates at which people are diagnosed and treated, countries can reduce the spread of TB and reduce incidence.

Target 2 is that as part of this approach 90% of the TB cases in key populations should be found and provided with appropriate treatment.

Target 3 is that there should be a 90% treatment success rate among people identified as needing treatment. This includes treatment for drug susceptible TB, drug resistant TB, or preventive TB therapy. This target is more ambitious than previously established targets for treatment success, as it covers 90% of all people diagnosed with TB, not just those who start treatment.

The focus of the National TB Programme in South Africa has historically been on treatment success rates. This fails to reflect "upstream" losses contributed by individuals who do not access health services. It also fails to reflect those people for whom TB is not diagnosed, notified and treated.

One study of the TB care cascade in South Africa suggests that only just over half (53%) of all TB cases in South Africa in 2013 were successfully treated, with substantial losses during TB diagnosis, linkage to care, and retention in care.4

Some people have suggested that there are also major gaps in the prevention and treatment goals.5 There are also considered by some people to be glaring health system constraints to achieving the goals. 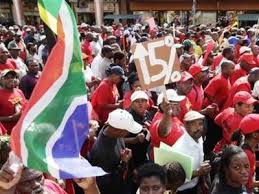 A report from the Treatment Action Campaign paints a picture of a public healthcare system that is often so severely dysfunctional that it hinders the implementation of HIV and TB programmes. It cites the lack of TB infection control in many clinics and hospitals as an example.

The plan shifts all the responsibility for its implementation to provinces. The principle may be sound, but the NSP provides little guidance to provinces on how to do this or how it will be measured.

Also much of what the plan proposes will require increases in human resources. Community health workers play a vital role in tracing some of those most at risk of TB, including those who have been in close contact with TB patients.

Delivering the services outlined in the NSP requires a well functioning supply chain. In a Stop Stockouts National Survey health facilities nation wide reported nearly one in five stock-outs of TB medicines resulted in the patient leaving the health facility without medication.

TB in South Africa - the costs

The total cost of implementing the proposed NSP over the five year period is R207 billion. Mobilisation of additional domestic resources is limited by a number of factors including the country's low economic growth. The NSP hardly makes mention of what proposed interventions may cost or if South Africa has the resources to fund them. As a result many of the NSP's interventions may end up unfunded and thus unimplemented.

If you have found this page useful please tell other people about TBFacts.org and if you have a website please link to us at tbfacts.org/tb-south-africa/