For a long time it has been known that there is a link between TB & nutrition. 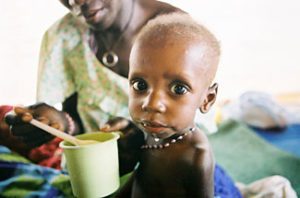 Malnutrition is often considered to refer to people having an insufficient intake of food. But it strictly refers to people having either under nutrition or equally people who have too much food, that is people who are obese. So in the context of TB it is usual to refer to under nutrition, which is people getting insufficient nutrients from their food.

Most individuals with active TB experience weight loss. Weight loss among people with TB can be caused by several factors, including reduced food intake due to loss of appetite, nausea and abdominal pain.

Although there is a clear link between active TB and under nutrition, in no way does malnutrition or under nutrition cause TB on its own. TB is only ever caused by TB bacteria.

Food insecurity and malnutrition in people who are in close contact of a patient with active TB, increases their risk of developing TB.

A person with TB should aim to have three meals and three snacks each day to increase the amount of food they eat. There is more about food & TB.

TB and Under Nutrition

There is increasing evidence that under nutrition in patients with active TB is associated with an increased frequency and severity of disease and indeed a two to four fold increase in mortality. There is also a five fold risk of drug induced liver damage.

A less than ideal weight gain during TB treatment also increases the risk of long term relapse even after initial cure. Under nutrition has also been associated with malabsorption of key anti TB drugs.

Under nutrition is linked to a number of serious outcomes related to TB disease which include:

There are a number of principles for providing nutritional care and support as a necessary part of TB care and prevention and these include.

1. When under nutrition is identified at the time of TB diagnosis, TB must be considered a key cause that needs to be addressed.

2. An adequate diet is necessary for the well being and health of all people, including those with TB infection or TB disease.

3. Because of the clear two way link between under nutrition and active TB, nutritional assessment and counseling are vital parts of TB treatment and care.

4.  Poverty and food insecurity are both causes and consequences of TB, and those involved in TB care therefore play an important role in recognizing and addressing these wider socioeconomic issues.

5. TB is commonly accompanied by co-morbidities such as HIV, diabetes, smoking and alcohol or substance abuse, which have their own nutritional implications, and these should be fully considered during nutrition assessment and counseling.

Because of the clear link between under nutrition and active TB, nutritional assessment and management are necessary parts of TB treatment and care for many people with TB.

A complete nutritional assessment will normally consist of 3 parts which are:

Nutritional status: Does the person look well nourished or not?

Diet and preferences: What is the usual diet and any favorite foods?

Food security: What is the situation with regard to access to adequate food for the patient? Is there any scheme related to subsidized food grains, or nutritional supplementation that the family is entitled to? Are they using them?

Understanding the impact of TB on nutritional status and the importance of nutritional recovery.

Many people with TB believe that during their episodes of illness that they require special foods. A person with TB does not need a special diet, although they they should try and have a balanced diet. There is more about  food & TB

The available evidence does suggest that nutritional support:

If you have found this page useful please tell other people about TBFacts.org and if you have a website then please link to us at https://tbfacts.org/nutrition-tb/.