How many children get TB?

An estimated 1 million children (<15 years) develop TB each year, and 205,000 children die. Children die from the disease at disproportionate rates, representing 10% of incident cases but 16% of deaths from TB.

These are the estimates for HIV negative children. Children who have TB and who are also HIV positive when they die are internationally classified as having died from HIV.

In 2006 National Treatment Programs were asked by the World Health Organisation (WHO) to record and report TB in children, dividing them into two age groups (0 - 4) years and (5 - 14) years.

A 2016 study estimated that 67 million children have latent TB.1 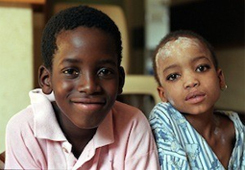 70-80% of children with Tuberculosis have the disease in their lungs (pulmonary TB). The rest are affected by TB disease in other parts of their body (extra pulmonary TB).2

About 30% of the global cases of TB in children are in India.

How do you treat TB in children?

There are two situations in which TB treatment should be provided for children. These are:

Young children who are unable or unwilling to swallow a large number of tablets each day need child friendly formulations to treat their TB. Ideally these should be in fixed dose combination (FDC) forms that are then dispersible in liquids, and can easily provide for dosing across different  weight groups.

There are several possible treatment regimens for latent TB. The drugs used include 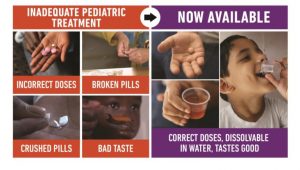 New TB drugs for children ©WHO

In 2016 new FDCs became available for the treatment of TB in children. Countries can access the new formulations  though the Global Drug Facility.

There is more about TB treatment for children.

So if treatment is available, why are 200,000 children dying every year?

Children with TB rarely die when they receive standard treatment for the disease, but 90 percent of children who die from TB worldwide go untreated. .. Health systems often neglect children with TB because children are less contagious than adults and stopping the spread of TB is a priority.3

Drug resistant TB is also an issue in children. It is estimated that more than 30,000 children become sick every year with strains of multdrug-resistant (MDR-TB)4 Also, an RNTCP survey in India, found that 9% of children with TB were already resistant to rifampicin, before they started treatment. This means that they had become infected with drug resistant TB.5

Another study estimated that globally 2 million children were infected with drug resistant TB, requiring the treatment every year of up to 25,000 cases of MDR TB in children.6

How does a child get TB?

A child gets TB in basically the same way as an adult, which is by inhaling TB bacteria which are in the air as a result of being released into the air by someone with active TB. The source of infection for children is usually an adult in their household who has active TB, is coughing and is infectious. There have though also been occassional instances of children being infected in a communal setting such as a school. The source of infection can be either another child or an adult.

Once the TB bacteria have been inhaled they may reach the lungs, where they can multiply and then spread through the lymph vessels to nearby lymph nodes. The child’s immune response then develops a few weeks after this primary infection. In most children their immune response stops the TB bacteria from multiplying further although there may continue to be a few dormant bacteria.7

However in some cases the child’s immune response is not strong enough to stop the multiplication of the bacteria, and TB disease then develops. The risk of progression to TB disease is greatest when the child is less than four years old, and to a lesser extent when they are less than ten years old. There is also a greater risk of progression in children who have a compromised immune system, for example because they are HIV positive.

Children who develop Tuberculosis usually do so within two years of first being infected. A small number of older children develop TB later, either due to reactivation following a period when the TB bacteria have been dormant, or as a result of reinfection.

Some children are at greater risk of getting TB than others and these include:

How do you diagnose TB in children?

This is quite difficult as children are less likely to have obvious symptoms of TB, and samples such as sputum are more difficult to collect from young children. Even when sputum can be collected, it may have very few TB bacteria in it (paucibacillary smear-negative disease).

But there are now new molecular TB tests such as Genexpert and Truenat which can be used to diagnose TB in children.

What are the symptoms of TB?

As with adults the symptoms of TB depend on the type of TB that the child has as well as their age.8 The most common type is pulmonary TB but extra pulmonary TB occurs in approximately 20-30% of all cases in children. Disseminated TB such as TB meningitis particularly occurs in young children less than 3 years old. Miliary TB is another name for disseminated TB.

In children with pulmonary TB the commonest chronic symptoms are a chronic cough that has been present for more than 21 days, a fever, and weight loss or failure to thrive.

Sometimes it is necessarily to use the test results from the adult who is believed to have passed TB on to the child, to ensure that the child is properly diagnosed and treated.

How do you prevent TB?

The main way that TB is prevented in children is by the use of the BCG vaccine.

TB can also be prevented in children by diagnosing and treating cases of active TB among adults. It is usually adults, particularly adults in the same household, who spread TB to children.

Children with TB are usually not infectious, and so will usually not pass on TB to either other children or adults although there have been occassional instances of this happening.10 If a child is known to have TB and is receiving treatment then individual advice must be obtained from an experienced doctor regarding when the child can return to school.

Access to care must be provided at the community level. Screening households where an adult is diagnosed with TB to see if children have been exposed in the home must become the standard implemented everywhere. Where this approach has been piloted, 72 percent of at-risk children have been able to receive preventative treatment, up from less than five per cent previously.

If you have found this page useful please tell other people about TBFacts and if you have a website please link to us at https://tbfacts.org/tb-children/